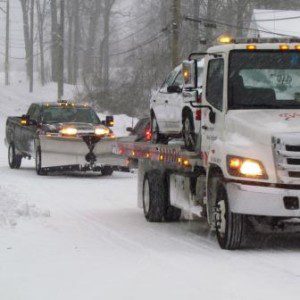 Another snowstorm? Skiers and other winter sports fans love it. But, driving in snow and ice turns every day routines into a nightmare.

Ever get behind a truck or car with snow piled on the roof, and chunks start flying in the air and you hope none of it strikes you? This violates the rules of the road in most states, whether the law is specific or a general provision.

Failing to clear snow off the roof of a vehicle in New Hampshire can bring a fine of $250 to $500.

Massachusetts rules of the road don’t specifically target failure to clear snow off the roof. But Massachusetts Police can stop vehicles with snow on the roof on a variety of general charges including negligent operation, which can actually bring license suspension. Another provision generally prohibits anything that interferes with proper operation of a vehicle and brings a fine. MGL c. 90, Sec 13.

New Hampshire passed its law in 2002 after 20-year-old Jessica Smith was killed in Peterborough when a 9 foot piece of ice flew off the top of a tractor trailer, causing a multi vehicle crash. Failing to clear snow off the roof of a vehicle is now a crime and drivers have lost CDL and other licenses for failing to clear snow from their vehicles in New Hampshire.

Brutally cold weather also tempts people to clear just enough of the windshield to see, not the entire view. That’s illegal too. The law actually requires full clearance of the windshield, rear window and the other windows before hitting the road.

There’s actually a case on the books in which a motorist was held liable for causing a serious accident with major injuries after clearing only a “poke hole” in the snow on the windshield.

Snow Rules of the Road

One driver slides on the snow and ice, bashing into a second vehicle. Often, other vehicles following too closely slam into vehicles in the first collision, resulting in massive accidents with huge numbers of vehicles. These accidents aren’t so much “caused” by the snow and ice as they are the result of failure to follow the rules of the road.

Most states have “rules of the road” spelled out in statutes, regulations and elsewhere. One of the most often ignored rules is the one prohibiting “tailgating”, or following too closely. Here’s a somewhat standard version, as it appears in Massachusetts:

“The driver of a vehicle shall not follow another vehicle more closely than is reasonable and prudent, having due regard to the speed of such vehicle and the traffic upon and condition of the highway”

Notice the “condition of the highway” language which imposes a legal duty on all drivers to observe snow, ice and other bad conditions and to increase following distance.

“No person shall drive a vehicle on a way at a speed greater than is reasonable and prudent under the conditions and having regard to the actual and potential hazards then existing.”

This is New Hampshire’s version of a fairly common general rule, meaning that ‘Speed Limit’ signs actually apply only under ideal conditions. A local road might be posted at 40. But under snow and ice conditions police can issue a ticket to drivers going that fast or less. And if there’s an accident, excessive speed under the circumstances could be much lower.

A catch all rule of the road in nearly every state also requires drivers to operate “under control at all times.” This is actually a codified official rule for which drivers can be cited. It is most often applied in rear-end accidents where one driver literally drives into another car.

State Not Responsible for Snow on Road

Every year my office receives calls from those injured in an accident on a slippery roadway and the question is whether the city or town is liable for failing to adequately clear snow and ice? The answer, 99% of the time or more, is no. Remember, the states make the rules so would they let you sue them or their towns for snow? Here is one such law:

“A county, city or town shall not be liable for an injury or damage sustained upon a public way by reason of snow or ice thereon, if the place at which the injury or damage was sustained was at the time of the accident otherwise reasonably safe and convenient for travelers.”

New Hampshire has a similarly harsh law which has been used to dismiss snow injury cases. In one, the driver of a car was injured when she drove over an open manhole obscured by the snow. In another, a person was hurt slipping and falling in an icy municipal parking lot in Laconia. The courts rejected both cases.

Snow and ice on the road present clear dangers. After an accident if you have the misfortune to get involved in a serious accident, the snow and ice are not the cause. Snow and ice were a condition. The cause was failure by one or more motorists to take that condition into account and to drive safely.

If you have been injured by the negligence of another driver in the snow or otherwise contact my office for a free initial consultation.