Wrong Way Accidents: Why They Happen 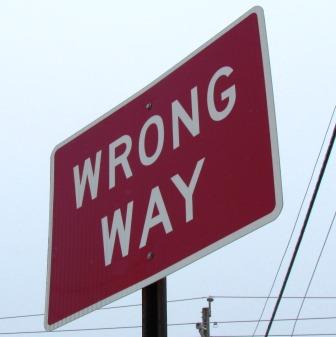 Wrong-way accidents cause between 300 and 400 roadway fatalities each year according to the Federal Highway Administration (FHA).  Wrong-way driving is defined as a driver who operates their vehicle in the opposite direction of travel on a freeway or highway and collides with a vehicle traveling in the right direction.

Although wrong-way accidents are rather uncommon only making up about 3% of all motor vehicle accidents, they are the leading type of motor vehicle accident to result in a fatality. In fact, some 360 deaths in the U.S. each year are due to wrong-way driving accidents. The fatality rate is projected to fall between 12 and 27 percent higher than all other types of collisions according to The National Transportation Safety Board (NTSB), which is why they have been proven to be among the most dangerous.

Wrong-way driving collisions are most often head-on collisions, which do not tend to leave motorists and passengers unscathed. Instead, if the accident does not result in death, the injuries drivers sustain are often extremely severe with long-term residual effects that require surgery and rehabilitation treatment.  Common injuries from wrong-way driving collisions include broken bones and other extremity injuries, whiplash, head injuries, spinal cord injuries, chest, abdomen, and rib injuries, brain injuries, as well as paralysis.

Of all of the listed reasons causing driver error, the leading cause is intoxication from drugs or alcohol. 50 to 75 percent of all wrong-way driving incidents involve an intoxicated driver. Not surprisingly most of these accidents tend to occur on weekends and in the late hours of the night between midnight and 3 am.

Most drivers immediately realize when they are driving the wrong way and turn around or backup. However, many drivers including sober ones will not realize until they are officially travelling on the highway amongst other vehicles that are headed straight toward the driver.

How To Avoid Wrong Way Drivers

To avoid wrong-way drivers, you must look beyond the first few cars ahead and scan the entire width of the roadway, not just ahead in your current lane of travel.  The further ahead and around you can see, the better prepared you will be since you may be able see the hazard approaching, and have time to take evasive action to avoid a collision. However, when drivers are traveling directly at each other on a highway, there is often little a driver can do to avoid the collision since the wrong-way driver is unexpected and the high rate of speed on highways.

There are a few strategies that you can keep in mind while traveling that may save you from being a victim of these terrible tragedies.  For example, always travel in the right lane if possible. Traveling in the right lane is the safest bet to avoid an on-coming wrong-way driver. The wrong way driver may be confused and assume the right is the slowest, but in the opposite direction, the wrong-way driver’s right is actually the left lane, also known as the fast lane.

Another reason to travel to the right is to avoid wrong-way drivers that may be on the wrong-side after crossing the center median. The NTSB study found that 7 out of every 9 wrong-way accidents occur in the lane closest to the median.

Reducing the likelihood of any accident requires staying alert, focused and avoiding distractions.  Phone use and other distractions take focus away from the road, causing drivers to become less aware of surroundings.  Drivers wrapped up in distractions are less prepared to react as quickly as needed to an oncoming dangers, and may not have time to avoid a crash.

Regardless of how prepared you are, and if you were able to safely pass the wrong- way driver, always pull off the roadway as soon as it is safely possible and call 911 to report the incident. If a wrong-way driving incident is reported, a warning can be sent out which could potentially prevent injuries and save lives.

How To Reduce Wrong-Way Accidents

Wrong-way accidents and the resulting highway deaths receive attention from transportation officials now developing a response.  States including Rhode Island and Texas are implementing new innovative ideas and designs in attempt to prevent further wrong-way driving incidents.  As of this writing, Massachusetts transportation officials are studying the issue.

The sensory and surveillance detection systems warn drivers that they are traveling in the wrong direction.  They also alert police if the driver fails to turn around.  Drivers on the threatened roadway can also be alerted to the danger with electronic highway signs warning of the wrong-way driver.

The new technology has achieved some level of success.  Within one year after Rhode Island installed the new technology as well as signs, wrong-way driving incidents dropped by 30 per cent.  Encouraged by those Department of Transportation findings, transportation officials nationwide hope that this approach can be used elsewhere.

One of the most important things you can do if you or a loved one suffers injuries or losses in a wrong-way accident or other accident is to retain experienced legal counsel as soon as possible.  After the initial shock of an accident contact our office to explore your options, untangle the confusion insurance companies can cause, and to retain an advocate for your best interests.

2 thoughts on “Wrong Way Accidents: Why They Happen”